If you walk over the Oberbaumbrücke in Berlin your attention pulled across the water to gaze at the massive murals of Italian street artist BLU. These 2 murals have become iconic in Berlin’s street art loving suburb of Kreuzberg with many people seeking to visit them. Perhaps the most photographed murals in the city few forget the experience of standing in front of them and learning of their hidden messages, but on the night of December 11, 2014 they would disappear forever.

Originally painted in 2008 these murals have a strong link to the culture of Kreuzberg and a deeper meaning than a first glance will offer. Over the years they have become an important landmark hanging above the infamous ‘Frei Cuvry’ Brache, witnessing the eviction of the Cuvry residents and then the destruction of Berlin’s largest inner city squat. Since then they have watched over the empty wasteland and been fenced off, keeping visitors restricted to view them from a distance.

This wasteland now sits waiting for the development of an apartment complex despite numerous attempts to stop the project. Since the closure of Cuvry the paintings became a last hope to save the land from being redeveloped and remain a free space but it was not meant to be. On the morning of December 12 Berliners woke to discover their beloved murals painted over with thick black paint. 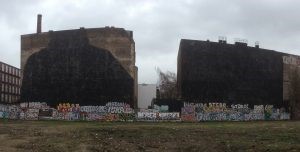 At first it was not clear who was responsible for the removal of the murals but considering all the graffiti art had been left untouched (a sign of respect) it could be assumed that the BLU himself was behind the removal of his work or at least gave his blessing for this to happen.

There was speculation that it was the investors themselves or the city who were responsible for the removal of the murals. For about a week there was still a bit of a mystery until the explanation came from those responsible.

In an article from co-creator Lutz Henke he said “we felt it was time for them (the murals) to vanish, along with the fading era in Berlin’s history that they represented.” referring to the the Kreuzberg they were significant to, a Kreuzberg that is fast disappearing.

The area known as the Wrangelkiez has seen rent rises and a boom of cafe’s, restaurants and and other tourist friendly venues fuelling the exponential gentrification of the area. The money makers behind this movement are biting the hand that feeds, so to speak, because it is this sort of creative space and artistic brand that makes the area so unique. The artistic movement is threatened by the increasing cost of living and those responsible for the art can no longer afford to live in the area.

Lutz Henke wrote “Why would an artist agree to destroy his own work instead of endorsing official attempts to preserve it as a public work of art? Out of despair? Clearly not. Rather out of sorrow”

During the removal, one of the hands was altered and left ‘flipping off’ the observer but eventually pained black as well. Perhaps aimed at the investors but maybe just an angry outburst over the whole situation as the artists accepted losing the battle against gentrification.

Now we have had time to accept it we are able to move on and keep in mind that that street art is made impermanent, venerable to the environment and never intended to last forever.