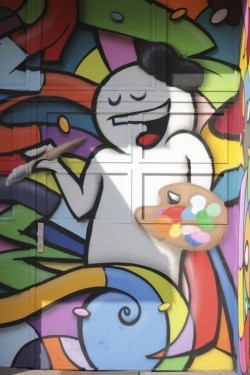 The work of Mein Lieber Prost graces the streets of Berlin with a smile. Prosties, characters, one liners, past ups, sticker art and add busting can be seen just about every where Berlin. His simple yet effective tag (the ‘Prostie’) makes me smile every time I see it.

When I first found Prost’s work I was new to Berlin and was intrigued by the Prostie Party posters all over town. As it turned out in true Berlin style, Prost was holding a party to raise funds to pay the price for being caught donating art to the streets. An awesome party at the Kater Holzig Club, but that was not the end. Prost’s work noticeably changed its tone as more aggressive and angry looking Prosties started to appear on the streets, obvious reaction to the trouble Prost had found himself in. Prost went on to hold several exhibitions featuring his typical Prostie but also some of his other works including a character collaboration with ALIAS.

His ‘final’ Berlin exhibition ‘Whats Wrong Prost?’ took place at Urban Spree and was a celebration to the artist and all of his work. Over the next weeks Prost took his work to a few other German cities and it seems the artists found somewhere else to stay for a while.. Certainly he will be missed by those who knew his work. Many Prosties can still be found around Berlin, hopefully one day he comes back to continue making the streets of this city just a little friendlier.

Farewell and thank you Prost!